It is a great privilege for me to be able to offer you clocks with the character miffy created by Dick Bruna.

This little rabbit rocked my childhood and to find him today with my little concept is a great source of pride.
The clocks were designed to help children find their way around their day and their week, and to learn to tell the time once they have acquired the notion of time with the first two clocks.
Each clock is unique by its illustrations supplied with the clocks.
They are handcrafted in France near Paris.

The creator of Miffy, Dick Bruna, was born in Utrecht on August 23, 1927. Not only has he written and illustrated no less than 124 picture books, but he has also designed numerous posters and book covers for paperback editions. by Black Bear. During a career spanning more than 60 years, Dick Bruna has gained international fame. He retired in 2011. Dick Bruna passed away on February 16, 2017 at the age of 89.

Sort by:
Best sellers Relevance Name, A to Z Name, Z to A Price, low to high Price, high to low
Showing 1-4 of 4 item(s) 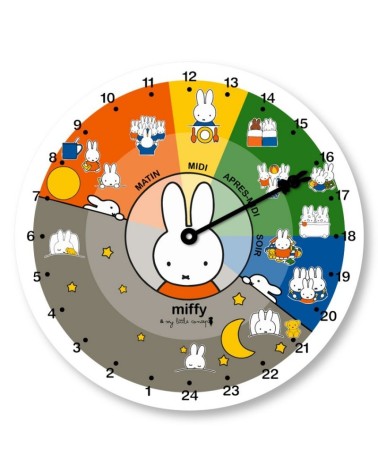 €48.90
Miffy
The 24-hour silent clock with miffy, a pendulum for learning the steps of the routine. The dial makes it possible to identify the night and day...
 Remove from Wishlist Add to Wishlist

€10.90
Miffy
Stickettes with miffy for a routine and a cute week. You will receive in duplicate, all the illustrations of the routine and of the week with...
 Remove from Wishlist Add to Wishlist 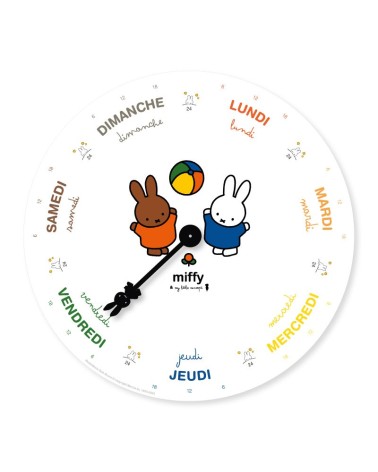 €29.50
Miffy
What time is it miffy? The silent 12 hour wall clock with miffy, to learn how to read the hours on a real clock. The minutes on the periphery...
Back to top 